About This Multimedia Project 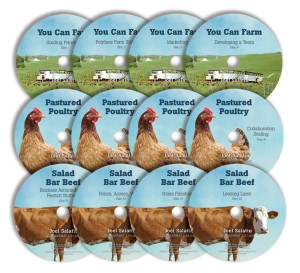 This multimedia training package ─ video, workbook, audio ─ is the result of the efforts of dozens of people in two countries and years of work.

It all starts with the 40-plus-year learning curve and insight of Joel Salatin and his son Daniel, who now manages the operations of Polyface. While Joel speaks frequently around the world, an appearance in Canada assembled by Rob and Michelle Avis of Verge Permaculture took things to a new level. Rather than an hour or two, or even a full day, they gave Joel three full days to explain the why and how of Polyface Farm in great depth.

Attendees came from five continents, and the event was live-streamed around the world to great acclaim.

These powerful sessions were professionally captured in a studio setting with multiple cameras and live-cut editing. The result is far from the the static talking head of so many videos, but a lively, visually interesting presentation. It truly is like being there.

These days of learning were followed up with multiple Q&A call-in sessions in which Joel and Daniel ─ as well as dozens of farmers actually practicing Polyface-style farming in their own varying regions ─ discussed the nuances of making it all happen in the field. 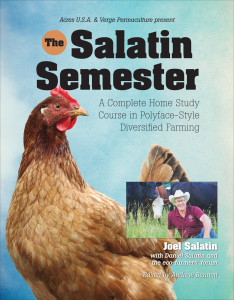 Top that off with a professionally edited, 256-page workbook that is sorted and indexed and you have a valuable how-to resource as well.

The original producers then partnered with Acres U.S.A., a multi-decade partner of Joel Salatin, to bring this assembly of information into a packaged product available to a wider audience.

About the Presenters and Editor

During his 30-year leadership of Polyface Farm, he has passionately charted a beyond-organic course, challenging federal and state requirements over issues ranging from the local sale of clean, healthy, and well cared-for meats, to his right to opt out of a highly bureaucratic system that favors pesticides, fertilizers, and GMOs over time-honored – and leading-edge – integrative practices.

In fact, the Salatin family and their working team at Polyface Farms proudly say that they “haven’t bought a bag of chemical fertilizer in half a century, never planted a seed, own no plow or disk or silo”!

The result? Despite all the industry experts’ dire predictions, Polyface is now the world’s premier example of sustainable agriculture: a 550-acre, multi-family operation, supplying a customer base of about 5,000 families, 10 retail outlets, and 50 restaurants. Its popular, high-value products include “salad bar beef” (named for the diverse, self-sowing pasture plants that the beeves eat), “pigaerator pork” (named for the pigs’ role in making compost and tilling the ground), “pastured poultry“ (named for the birds’ free-range feeding on the bugs in cattle and pig droppings), and forestry products.

In fact, while Joel calls himself a “lunatic farmer,” Time magazine has named him “the world’s best farmer” – and The New York Times titles him “Virginia’s most multifaceted agrarian since Thomas Jefferson [and] the high priest of the pasture.”

Daniel Salatin is the next generation keeping the mission of Polyface Farm alive.

Joel’s son Daniel Salatin, now in his 20s with a family of his own, grew up on Polyface Farms and absorbed his father’s agro-ecological practices through a lifetime of full-immersion participation.

Daniel started his career early, carrying freshly processed chickens when he was in diapers. By age 7 he’d started his first entrepreneurial venture: a pastured rabbit enterprise. That business is still continuing today, despite having the normal ups and downs, and it’s given him first hand experience with marketing, processing, research and development, and reinvestment of profits.  Daniel gave his first conference lecture, on his rabbit business, at an Acres U.S.A. Conference in Lancaster, Pennsylvania before he was even 16.

Calgary native Andrew Bennett—book editor and moderator of the student forum during the online Salatin Semester—spent his early years travelling for his parents’ work, landing in Jakarta, Indonesia, when Andrew was four. After high school, he returned to Canada to study astrophysics at the University of British Columbia.

Early exposure to the world’s eco-social problems ultimately took priority, and he left university to travel in Central America. Permaculture crossed his path and he began a pendulum swing between environmental degrees and real-life degrees as he followed his passion for agro-ecology, natural building, and the many ways people can lead fulfilling lives in harmony with each other and all life.

After a stint collecting data on wildlife tracks for a highway project in Alberta’s Rockies, Andrew and his wife Caley headed further west for winter fun in the interior ranges of British Columbia. They settled in Rossland to become urban farmers, inspired in large part by the humour, integrated ecological systems, sound business sense, and respect for nature encouraged in Joel Salatin’s books.

Andrew worked as a local journalist until he and Caley launched themselves full time into Moon Gravity Farm on leased land at the edge of town. They expanded from vegetable gardens to chickens, bees, rabbits, dairy goats, sheep, ducks, and geese. In 2013 they welcomed their son, Torin, to the mix, and they are getting set for his younger sibling to arrive…

After many years of tinkering in small ways with big permaculture ideas, the family is now growing diverse, healthy food on other people’s land using portable equipment and ecosystem design. They’re bolstered by the fervent belief that yes, with low capital investments, retail sales, and inventive creativity, eventually this will make a decent living while healing the Earth and building relationships between people and with the land.